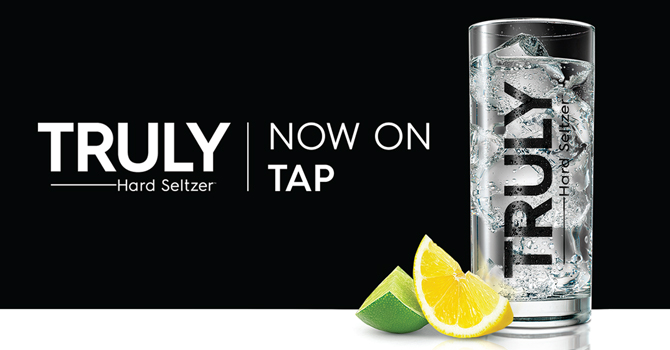 Truly Hard Seltzer-maker Boston Beer Company announced today the nationwide launch of “Truly on Tap,” a new product that the company is calling "one of the first hard seltzers available on draft” across the country.

Boston Beer founder Jim Koch first teased the product, then called “Pure,” — a name that competing brand White Claw also announced for a similar product — in January during Beer Business Daily’s annual Beer Summit. At the time, Boston Beer positioned the product as an alternative for vodka soda drinkers in bars and restaurants.

Boston Beer CEO Dave Burwick told Brewbound, via email, that Truly on Tap is the Pure offering renamed. He noted that Truly on Tap shares many of the attributes of a vodka soda: “effervescent, clear, finished with a squeeze of fresh fruit” but with a lower ABV.

“Truly on Tap is closer to original seltzer and meant to be finished off with a squeeze of fresh fruit like lemon or lime,” he said of the product, which checks in at 5% ABV and 100 calories, with 1 gram each of sugar and carbs.

According to the sales sheet, Boston Beer appears to be positioning Truly on Tap as an alternative to light beer and spirits, attempting to capture happy hour and game-day occasions during the upcoming football season.

Additionally, the company calls out a Radius study, which found that two-thirds of drinkers said they would substitute drinking a beer at a bar with hard seltzer if it were available. If that wasn’t a sobering stat for alcohol producers, Boston Beer cited a Harris Poll that the company commissioned last October that found 70% of 21- to 31-year-old consumers said they’d choose hard seltzer over other alcoholic beverages at bars and restaurants.

“Now it will be easier than ever with Truly on Tap,” the company said on the sales sheet.

Boston Beer will support the national launch across its digital channels along with on-premise point-of-sale items, including tap handles and glassware, Burwick said.

Early response from Boston Beer’s wholesale network has been “incredibly positive,” he added.

“We know drinkers are asking for hard seltzer on-premise and their current option is limited to cans,” Burwick said. “As the category continues to grow and evolve, and drinker preference shifts, we believe most bars and restaurants will have a draft line dedicated to hard seltzer. We aren’t concerned about an existing Boston Beer product as Truly carved out its own whitespace within the alcohol category and provides a different value proposition for on-premise drinkers. We anticipate similar consumption habits to light beer than anything else.”

According to Burwick, consumer demand for hard seltzer in on-premise accounts has also picked up this year as awareness of the product has grown.

“We’ve seen the hard seltzer grow at an unprecedented rate this summer, and we think accounts will be more likely to explore the possibility for a hard seltzer draft line than they would have at this time last year,” he said.

Asked if other Truly products would be available on draft in the future, Burwick said Truly on Tap is the company’s “focus for now, but if there’s anything hard seltzer has shown us, it’s to expect the unexpected.”

Truly, along with White Claw, already make up 85 percent the off-premise sales of hard seltzer offerings, according to market research firm Nielsen. The firm also projects the hard seltzer industry to generate $1 billion by the end of 2019.

In other hard seltzer news, at least one big player has already pulled the plug on its hard seltzer.

Constellation Brands is stopping production of its Svedka Spiked Seltzer after not meeting “expectations for growth and profitability” in test markets, according to Maggie Bowman, the senior director of communications for Constellation Brands’ beer division. Subscription newsletter Beer Business Daily noted the end of the product earlier this week.

Bowman told Brewbound that the company will “continue to pursue meaningful ways to participate in the seltzer category and other high-end segments that consumers are migrating towards.”

“We are committed to doing this in a disciplined way that maximizes value for all three tiers,” she added. “This decision allows us to direct more focus and resources to future growth opportunities.”

Craft breweries continue to join the mix, including Maui Brewing Company, which plans to launch a seltzer line in Hawaii later this year. Another Hawaiian company, Ola Brew, is releasing a line of hard seltzers made with Hawaiian grown products starting in September.

Southern California’s Pure Azul Beverage also announced today the launch of Azulana, a sparkling tequila beverage made with 100% blue agave tequila, which will be available for the first time during tonight’s Rolling Stones concert at the Rose Bowl.