Why Filtration Matters for Beer

Why Filtration Matters for Beer

From diatomaceous earth to sleek new centrifuges, there’s a step that many of your favorite beers go through, and while you might not immediately taste a difference, you can sure see it.

Late nights, clogged filters, and the threat of oxidized beer—these were a few of the headaches plaguing brewers at SaltWater Brewery in Delray Beach, Florida, not long after the brewery was founded in 2013.

As demand for cans of its flagship Screamin’ Reels IPA increased, so did SaltWater’s reliance on filtration to create a shelf-stable product. In the beginning, the brewery ran the 7 percent ABV IPA, brewed with Summit and Columbus hops, through a plate and frame filter, but the process resulted in a 13 to 14 percent loss of beer. Fast-forward a few years, and SaltWater upgraded to a lenticular filter, which reduced beer loss to 10 percent but required extra time to sterilize.

A better, less time-consuming approach arrived in 2017 when the brewery installed a centrifuge from German company GEA. The investment was worth every penny, according to Dustin Jeffers, SaltWater’s head of operations and cofounder, as the device limited beer loss to 4 to 5 percent.

“I think it’s the second-best thing we’ve ever bought, besides our canning line,” Jeffers says. “It’s consistent. It’s awesome. As much money as we’d spend on filter pads and man hours, the centrifuge paid for itself.”

Similar stories abound in the craft- brewing industry as more breweries adopt centrifuge technology. After fermented beer enters the rapidly rotating centrifuge bowl, solids such as yeast, proteins, and hops debris are forced to the bottom and outer discharge chamber, while the remaining liquid avoids oxygen and flows through an outlet. In addition to improving the yield of a batch, breweries can turn over tanks quicker, and some brewers claim improvements to the aroma and flavor of their beer.

“Centrifuging is the Cadillac of separation,” says Dave Hoops, who opened Hoops Brewing in Duluth, Minnesota, in 2017. But the technology doesn’t always make sense for smaller breweries—especially considering that the cost of a centrifuge can range from $80,000 to $1 million. In general, the type of filtration that a brewery uses depends on its size, distribution footprint, and the main styles it brews.

Hoops brewed 1,500 barrels of beer in 2018 and sells about 90 percent of his beer on-site. He uses a simple cartridge filter for many of his beers, but for pale ales and India pale ales, he sticks to Biofine, a vegan-friendly fining agent that helps separate solids from beer in 2 to 3 days.

“The old brewers used to use time and temperature to clarify their beer,” says Hoops. “Biofine is just a faster version of time and temperature. You add that into the beer while you’re transferring from fermentation into the bright tank, and the turbulence allows everything to get homogenized, and it settles out.”

At Goat Patch Brewing Co. in Colorado Springs, Colorado, Head Brewer and Co-owner Darren Baze follows a similar path. Baze uses a fining agent for hops- forward beers (except for hazy IPAs) while lighter beers such as a blonde ale and a red ale, which won a bronze medal at the 2018 Great American Beer Festival, pass through a lenticular filter. “It works similar to a plate and frame filter, but it’s all enclosed so you don’t take in oxygen,” Baze says. “You can purge all the air out of it with CO2.”

Regardless of beer style, some breweries prefer to skip filtering and fining altogether. Iowa-based SingleSpeed Brewing brewed 4,000 barrels in 2018 with canned beer accounting for about half of its volume. Brewer and Founder Dave Morgan says SingleSpeed rarely uses fining agents and doesn’t filter its beer. “We’ve found for 80–90 percent of the beers that we like to put out there, the fining does more harm than it does good, no matter what technique we use,” he says. “It seems like it’s stripping too much character out of the beer for us.”

Another method of filtration is prehistoric, but still used by many large breweries. Diatomaceous earth (DE) is a naturally occurring substance comprised of fossilized remains of diatoms, a group of algae. Used in tandem with a variety of filters (typically plate, leaf, or candle), DE helps polish beers to increase clarity. Until 2 years ago, before the brewery installed a centrifuge, Firestone Walker Brewing Company (Paso Robles, California) was mainly using DE filtration. At New Belgium Brewing Company (Fort Collins, Colorado), almost all of the brewery’s beer goes through a centrifuge and DE filtration to ensure shelf stability and clarity. 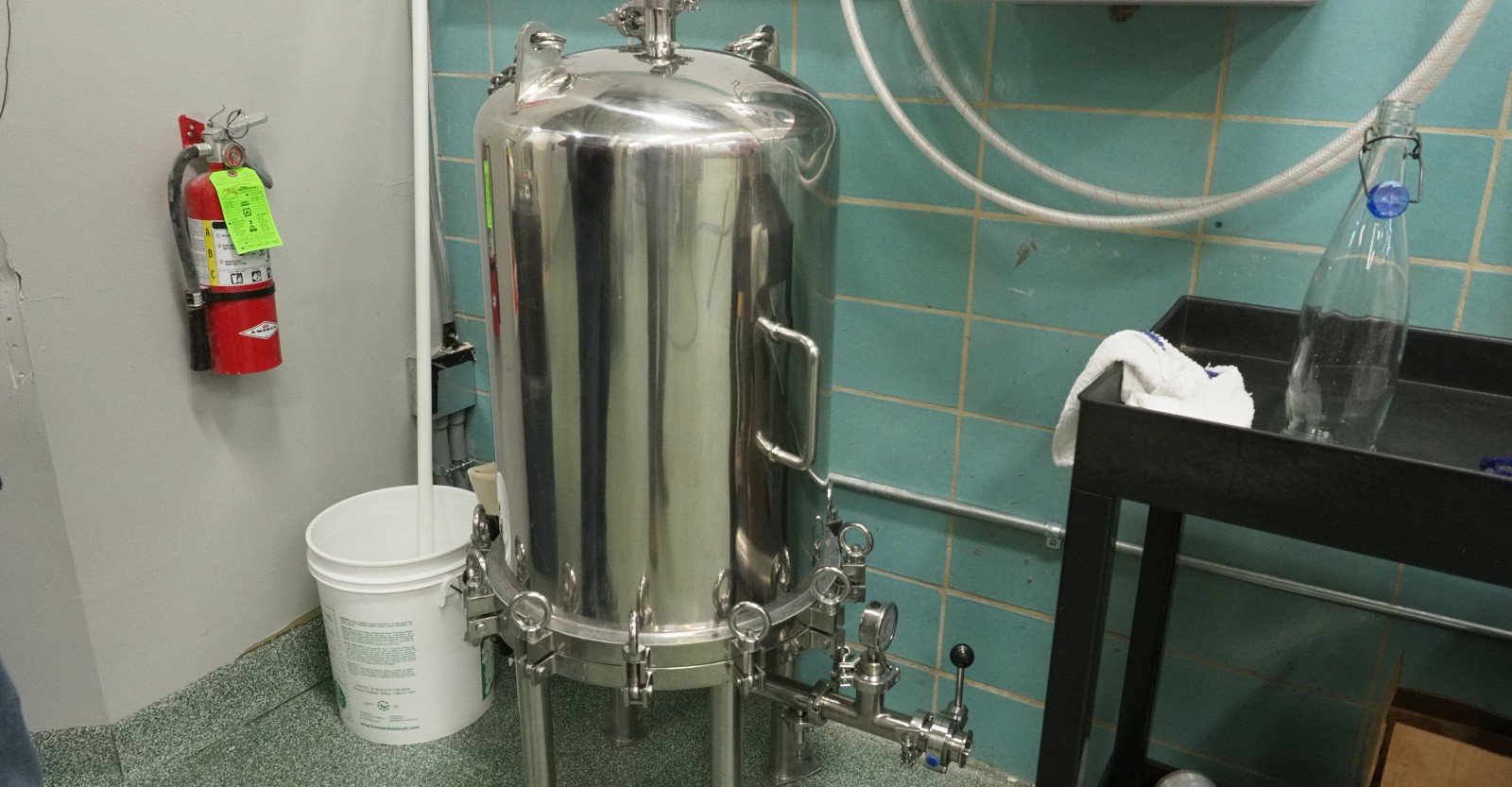 You can throw almost anything at them.

At Great Divide Brewing Co. in Denver, some lighter beers, such as Hoss, a 6.2 percent ABV Oktoberfest lager, are filtered with DE, but Head Brewer Kyle O’Loughlin says the brewery centrifuges the majority of its beers. Unlike other filtering methods, it’s almost impossible to overwhelm a centrifuge, according to O’Loughlin.

“They’re designed in such a way that you can throw almost anything at them, and they’ll keep going, versus a DE filter, which can over-pressurize very easily,” O’Loughlin says. “A centrifuge is just a lot more user-friendly.”

So user-friendly, in fact, that brewers can manipulate the level of turbidity in the finished beer, meaning they can centrifuge a hazy IPA without removing all of its haziness. That is especially useful to breweries packaging hazy IPAs for widespread distribution.

While planning to package Mind Haze, a 6.2 percent ABV hazy IPA, Firestone Walker brewers wanted to remove all yeast (which can bring along trace amounts of harsh iso-alpha acids) and hops-pellet dust (which can lead to hops burn, an undesirable “bitter burn in the back of your throat,” according to Brewmaster Matt Brynildson). “We’re selling this beer in the broad market,” Brynildson says, “so we’re centrifuging all the yeast out of that beer, and it still maintains its protein tannin haze.”

But extra time may be the biggest benefit of a centrifuge to brewers.

“The man hours that we would spend restarting the filter on some of these beers that we don’t have to do now—it streamlines the plan,” says Firestone Walker cellar manager Sam Tierney. “It gives us the security of not having these catastrophic situations where we pull in sludge out of the tank, and on the old filter, without the centrifuge, it would be game over. Your run would be done.”